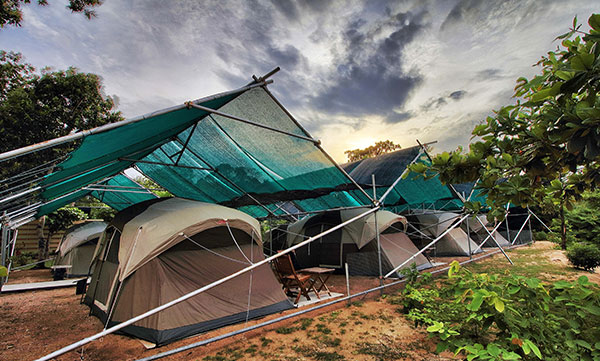 A turtle hatchery and visitors to have the chance to release baby turtles from the hatchery.

Libaran Island lies on the north-eastern coast of Sabah, about 40 minutes boat ride from Sandakan and five minutes away from the main islands of Sabah – Turtle Island Park.

This resort started operations on November 2013 with eight units of Glamping tents.

Turtles are a protected species and efforts have been made by both the government and private sector to curb illegal harvesting of their eggs. There are about 450 inhabitants on the island, whose main source of livelihood is fishing and boat making. Turtles are known to come ashore and lay their eggs on the island. Through the Memorandum of Understanding (MoU) signed with the Sabah Wildlife Department on July 2013, a turtle conservation program was set up on the island.

As part of the company corporate social responsibilities (CSR), Walai Penyu Resort, Libaran has opened a turtle hatchery and visitors now have the chance to release baby turtles from the hatchery. It is very satisfying to see the little ones strike out to the sea. If one is lucky, one might see turtles coming on shore to lay eggs.

Rest and relaxation through the day are the best thing to do after enjoying breakfast. Breakfast by the sea, watching the waves crash on the shore and the birds flitting by, what can be more idyllic than that.

Lunch and dinner should be looked forward to as it’s a time to sample local cuisines prepared by local chefs.

**Even though record shows turtles come to Libaran island consistently, the sighting is still NOT GUARANTEED.

Extra person in a camp only applicable for child (12 years old and below).

With our passion comes commitment to share our mission which is to enhance your travel experience with the provision of various information that will make your visit to Sabah Land Below the Wind, unforgettable.